Having arrived at Dusseldorf around 20:30 (8:30pm), I took a taxi to the Youth Hostel and was greeted in the Friday room (Saturday we moved to a larger room) by Ithamar, Rene and the svenska duo, Fredrik and Henrik. Charlie and the german team (Axel, Stephan, Ingo and Oliver) arrived a bit later, coming back from their dinner out. Later that night it was time for the French connection! François, Olivier and Jerôme (with his lovely wife) made it to the Hostel.

After a while, Ithamar and I decided to go out for a bite, which turned out to be a two and a half hours walk around Düsseldorf with a 5mns stop to get a Schwarma wrap for dinner (quite tasty too). When we got back to the Hostel there were only François and Olivier in the room and after a bit of chatting I decided to call it a night. Ithamar of course, and as usual, stayed up all night working on the ARM port and drinking coke.

Saturday rolled by and more people started to arrive. You can see that from the photo below, although even more people showed up (such as Adrien) after it was taken. 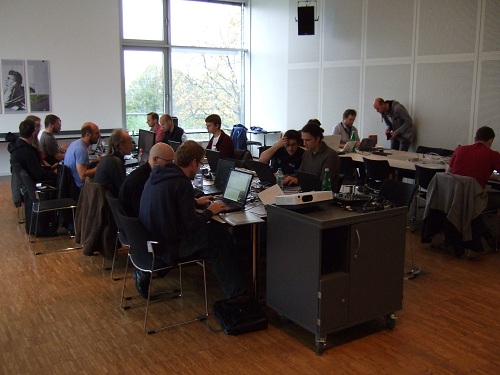 Soon enough it was time for lunch at the Hostel after which it was time for... the presentations!! First of all, all the way from New Zealand was Clemens (who had anything but a short travel... not counting the layovers he had at least 25 hours of flying – take that Felix Baumgartner!). His presentation was on his new ALE – Auckland Layout Editor. 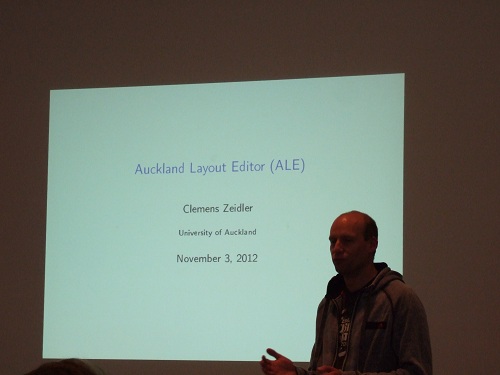 The presentation was very interesting (even for a non-technical guy like me), showing the different types of layouts (for example Grid and Flow). Clemens definitely saved the best for last, with a live demo of the MediaPlayer using the ALE. With it playing an MP3 (“Virtual Void” by the old BeOS Crew!) he proceeded to change the layout of the window, adding and removing buttons, widgets, etc. The first time he did it the reaction was audible. Impressive indeed. A small Q&A session followed.

Next it was Stephan's time, demoing the new version of Wonderbrush he's been working on for a while now (few years) during his spare time. 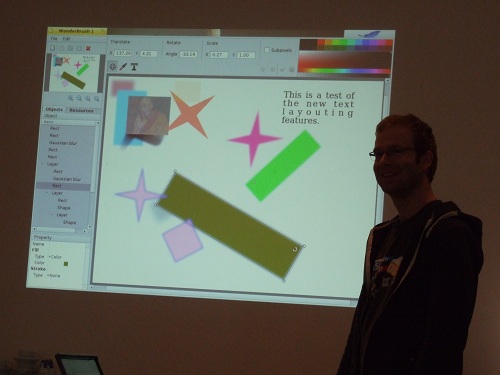 He compared it to the old (current) Wonderbrush, highlighting the improvements he's made so far, for example in the layers system, the item selection directly on the canvas, and also on the new text tool: 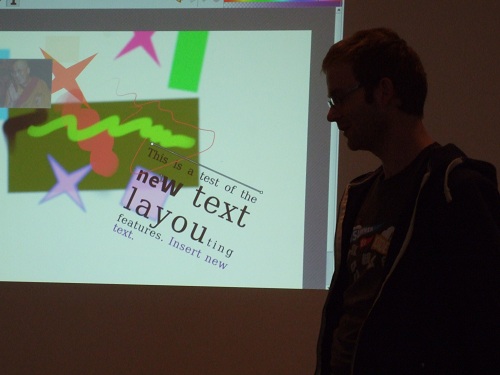 Even though this is still a prototype and very early work, it's looking very good. He did a comparison between Wonderbrush and Gimp and the smoothness of the Brush tool in Wonderbrush compared to the (lack of) smoothness in Gimp was noticeable. While in Wonderbrush the brush (the path of it) follows the cursor as smooth as butter, in Gimp there's quite a bit of lag between the both.

You've probably read over at the Haiku website Stephan's post about this new Wonderbrush, where he mentions the Qt port being done by Ingo. Today we got to see it and although it's an infant port, it opens some interesting possibilities for the team, hopefully they'll pan out. Here's the Qt port in action (notice it's running on Ubuntu: 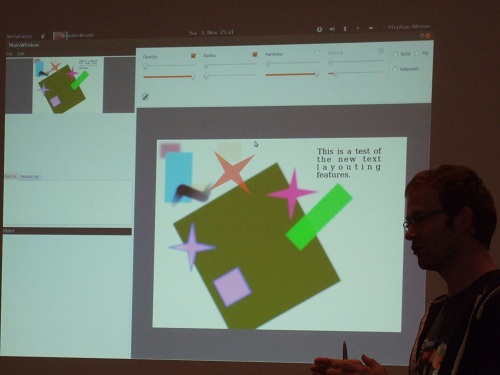 A couple of hours later and it was time for dinner. Most of us headed to the city center and enjoyed a meal followed by a glass of Killepitsch (first time I tried, it's good!), which warms you right away after you start drinking. 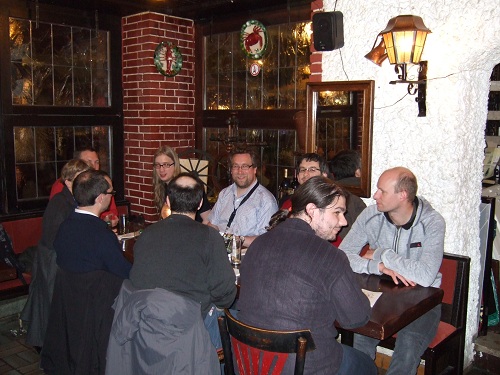 That was just one table, in the other one there was me, Ithamar, Rene, Alex, Stephan, Fredrik and Henrik. Of course, ours was the cool table.

All through Saturday afternoon and evening we had internet access problems, it was down for most of the time. Charlie got a SIM card but we were unable to share the connection. Fun! During all this time Ithamar to my right was working away on the ARM port while Rene to my left was debugging the debugger!

Sunday morning (again didn't got up in time for breakfast) saw Ingo's presentation on debugging software in Haiku, using “Debugger and friends...”. Although technical (and some of it just went over my head I must admit), it was definitely interesting, showing the tools currently available to Haiku developers, allowing them to improve their code/apps. 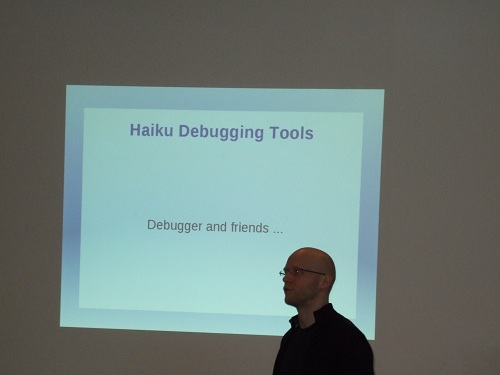 When it comes to the Debugger specifically, some features are still missing: 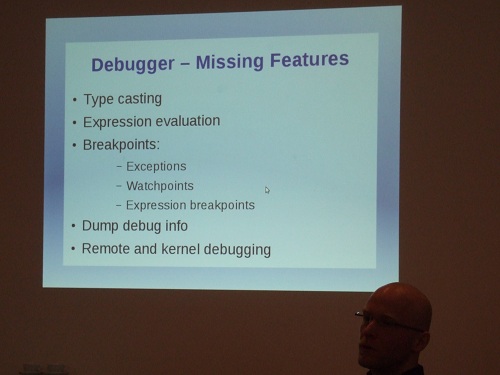 Regarding the first one, Rene's currently working on getting Type casting in there. As he said “it's not there yet but getting closer”. After lunch it was Adrien's turn. His presentation topic was about old BeOS applications running (or not) under Haiku. 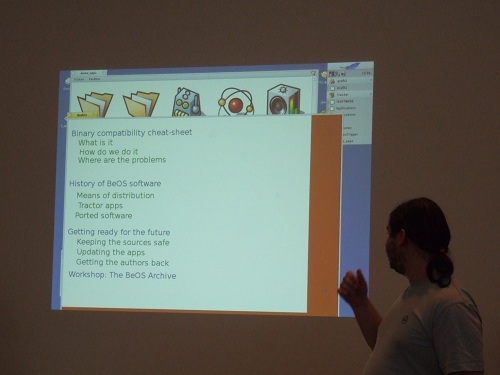 He's been collecting the sources, when available, for some of them and has been working on getting them to work in Haiku and improving them as well. He showed two examples, an old game called Critical Mass and a music composer called Sawteeth (the demo was striking). Adrien also asked for anyone willing to help with his project, to head over to his archive for old BeOS software, pick an application, write a small description, take a screenshot and send it back to him. Also, if you know of any old software which you think would be useful/interesting/funny to have in Haiku, why not try to contact the author and ask for the source?

The final presentation of the weekend was François'. The subject was his port of Haiku to the SAM460ex platform. 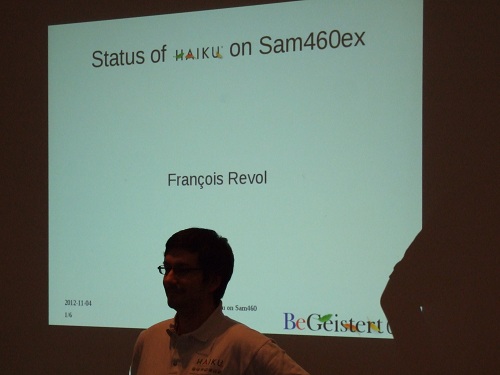 According to François, it hasn't been an easy port, he's had to apply for example a workaround, getting Haiku to bootloader as a Linux kernel. It boots but for now it halts shortly after with an error message complaining there's no RAM installed. François continues to work on it, let's see how it progresses.

After that more people left and it was pretty quiet the rest of the afternoon (don't worry, I went for a walk and payed the sheep a visit) until it was time to get a taxi to the airport and hop on the plane back to the UK. All in all it was a good BeGeistert in my opinion, wasn't the busiest but wasn't the quietest either, let's call it “midterm”. But, as always, it was fun and was over way too quickly. And also as usual, thanks to Charlie and team for putting it together. They deserve all the credit they get.

We have 1464 guests and no members online